One of the last activities that we were able to do at the ICAC before confinement was the VII edition of the Seminar on Epigraphy and Society in Tarraco, coordinated by Diana Gorostidi (URV-ICAC) within the course Textual sources for the historical research. Epigraphy and papyrology, in the framework of the interuniversity master’s degree in Classical Archaeology (URV-UAB-ICAC).

Therefore, the master has been running this seminar for seven years, aiming to bring active research into sources and epigraphy closer to the students, by young researchers who are in the early stages of their research career.

In this case, it was given by Ada Lasheras, who spoke about the methodological relationship between archaeology and written sources, and presented some case studies, with a session entitled «For a social view of archaeological materiality through written sources». These case studies were:

Analysis of written sources is essential, in archaeological studies. It provides us with valuable information to understand social phenomena, which are often difficult to grasp only through material reality.

As Lasheras explained, the introduction of the gender perspective in the exhaustive study of textual sources has allowed us to meet some women who were professionally engaged in fighting in the arena of the amphitheatre: the gladiator women. And through them, at the same time, we can reinterpret archaeological evidence and have a richer, broader, more complex image of the role of women in Roman Antiquity.

The presence of female combatants in the arena of the amphitheatre generated some controversy because, by following behaviour that could be considered virile, these women represented a reversal of socially accepted gender roles. However, according to Lasheras there are different testimonies that confirm the existence of these gladiator women, and the exotic and exceptional character that the games in which they participated acquired:

[Domitian] constantly offered magnificent and sumptuous shows, both in the amphitheatre and in the circus […]. He also offered wild animal hunts, torchlight gladiatorial games at night, and not only combat between men but also women (Suet. Dom. 4, 1).

But perhaps the most prominent testimony is a marble relief from Halicarnassus, from the 1st to 2nd centuries AD. and preserved in the British Museum. It is a unique finding in which two gladiator women are represented and, in addition, their names are indicated: Amazon and Aquilia (see the previous image).

Their clothing is also very interesting because it is the same as that of their male companions. This fact has been essential for the reinterpretation of a small bronze statuette from the 1st century AD, kept in the Museum of Arts and Crafts in Hamburg (Museum für Kunst und Gewerbe) and traditionally defined as an athlete. But, thanks to the data provided by the written sources and the Halicarnassian inscription, it has been possible to reinterpret it as the representation of a gladiator woman. 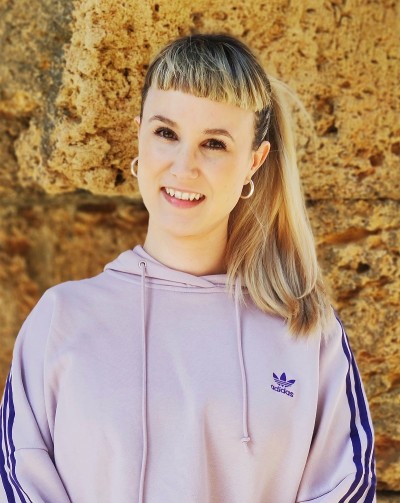 Her research is mainly focused on Late Ancient cities and ports, with a special interest in the urban planning of port areas and the exchange networks of the Western Mediterranean between the 3rd and 8th centuries.

In this line of research, she has participated in multiple conferences, seminars and meetings of a scientific nature, which have involved different publications of international projection.

She has also dedicated part of her research to women’s and social history, with different specialized publications in this line of research.

You can find a complete list of his publications and scientific activities here.