Since 2004, the ICAC has played an active role in the archaeological research and transmission of knowledge of the Roman town of Iesso, in close cooperation with the Autonomous University of Barcelona (UAB), the Guissona Council Town and the IEC (Institut d’Estudis Catalans).

The results obtained from the “Archaeological Research at Iesso (Guissona)” project led to the inauguration in 2011 of the Iesso Archaeological Park and the museological renovation of the Eduard Camps Museum-Interpretation Centre in Guissona.

The archaeological excavations contributed new content to the dissemination activities and instructed the technical assessment of the architectural project executed during the layout of the new archaeological park. The graphic documentation and the application of new georeferencing techniques have allowed an increase in the educational resources and the development of an audio-guide for the park.

The ICAC also cooperated in the production of a new audiovisual that forms part of the tour of the Museum-Interpretation Centre. This activity was awarded the Musa Prize 2012 by the Auriga Foundation as the Best Permanent Exhibition. 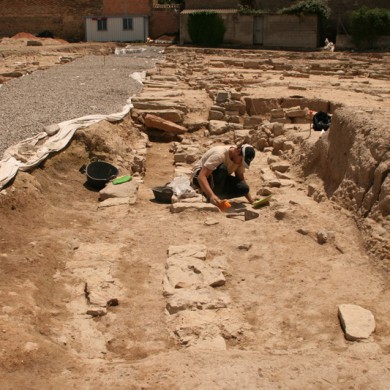